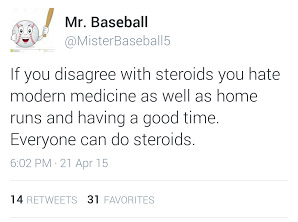 It is a sad day, friends. Today was supposed to be the day I was going to tell you about the wonderful Twitter account known as ‘Mr. Baseball’, an alias of that inscrutable user known more widely as Dwayne, or @collatingbones. However, as he often does, after about a week and a half of tweeting as ‘Mr. Baseball’, this evening he ditched the handle for an even more impenetrable new identity, Dwayne is now tweeting as ‘River King’ (@RiverKing000000) and it’s unclear what the new focus here is but it’s heavy on references to the Catholic church so far.

Dwayne is, plainly-speaking, one of the two or three best Twitter users I’ve encountered in the time I’ve been on there. Last summer, he tweeted out a seemingly endless re-imagining of the Simpsons which chronicled the lives of the famous Evergreen Terrace family as hardcore stoners against the decade-long backdrop of the War on Terror. The Marijuana Simpson tweets, as they were known, were deleted from Twitter, but they have been compiled as a 249-page screenplay for posterity. I can’t describe it to you, but I do recommend it. If you can get past the early exchange where Errol Morris ambushes a defensive Donald Rumsfeld with, “Did Homer Simpson smoke weed?”, without cracking up, it might not be for you. Yet it remains, to this day, the most honest attempt any American has made to deal with the fallout of the invasion of Iraq.

This spring, however fleetingly, he turned his attention to our national past-time. Frankly, it was the best baseball writing on the web this week or this year. He started out with surrealist baseball-inspired poems, koans, and acrostics, lapsing sometimes into proto-fascistic sloganeering, but after a couple of days, he started to find the voice of the ‘Mr. Baseball’ character: an anthropomorphic baseball who detests pitchers and all that they stand for, who reveres the powerful, muscular “slugger” archetype as a Nietzchean superman. And is also kind of a hardcore Zionist. Though the handle and display name have changed, the tweets are still up:

If my son told me he wanted to be a pitcher I'd send his ass to Israel.

Is it any surprise that the cowardly pitcher makes his home on a pile of dirt?

Perhaps the slugger's most admirable quality is his sneering contempt for the gawking, emaciated "fans."

In my dreams I see the great sluggers of history crossing a river choked with human corpses.

The New York Times ran a feature on the oldest-living former New York Yankee, who appeared in only one big league game in 1947. Like the era’s most iconic Yankee, Joe DiMaggio, Rugger Ardizoia is an Italian-American from Northern California. Now 95, and living in his hometown of San Francisco, Ardizoia reflects on his life in baseball and his enduring love for the game:

“Ardizoia has lived in the same house since 1940, the year before he first played as a Yankees farmhand and back when he was a “quiet, polite lad,” as The New York Herald Tribune once described him. Today, about 75 years later, he gets around the house with a walker. Yet reminders of his youth are everywhere.

The dining room has a rotary phone that Ardizoia said he bought in 1942 and still uses. Down a steep, narrow stairwell and through the garage is a utility room whose walls are covered from floor to ceiling with black and white photos dating from the 1930s, when Ardizoia’s professional career began. One shows him golfing with Phil Rizzuto; in another he is sitting with Joe DiMaggio. Steel spikes and a mitt Ardizoia played with in 1949 rest on the floor.”

At Grantland, Ben Lindbergh compiled a whole heap of early season data to try and diagnose how several of baseball’s prominent trends have carried over into 2015. He tracks run-scoring, the K-rate, the strike zone, shifts, and pace-of-play, all areas of much consternation over the offseason, and finds reasons for optimism on all fronts. The K’s have leveled off, the games have been shorter, and run-scoring is up a tick. It’s worth a read-through for the deep dive into the numbers:

“Most baseball seasons bleed into one another with little statistical recalibration required. For years at a time, “average” means almost the same thing, and we know at a glance whether a guy’s numbers are good. Every so often, though, the baseline shifts so significantly in a single season that the familiar signposts are swept away. Those are the years when the games get overshadowed by the offensive environment, and the extremes stand out in the statistical record like the boundary lines left by a rising or receding tide: 1930, 1968, 1987.

The last such expectation-altering season was 2010, when run scoring sank by 5 percent, the average OPS fell 23 points, and the leaguewide strikeout rate broke seven per nine innings for the first time. In a callback to ’68, contemporary writers referred to 2010 as the “Year of the Pitcher” — another reminder that it’s easier to assess a season’s historical standing in retrospect than it is in the moment. The deeper drought in the four-plus seasons since the second so-called “Year of the Pitcher” has made that appellation look premature.”