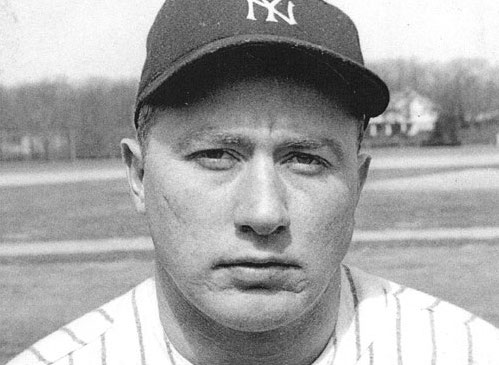 No sport has names quite like baseball has names. There are good names, there are very good names and then there are the pantheon of essential baseball names. Casey Stengel and Whitey Herzog are good (maybe even very good) names. Minnie Minoso is a great, great name. But those can’t tie the shoelaces of an Oyster Burns or Pretzels Getzien or Van Lingle Mungo. Football may have the TV ratings, basketball has the trendy culture, but baseball has some serious names.

But you notice something about essential baseball names. They rarely, if ever, correspond to an essential baseball player. Which is to say that most great baseball names are the greatest thing about the player who possesses said name. Pretzels was a pitcher with a .511 winning percentage and Oyster once lead the league in homers with 13. Van Mungo had the exact same winning percentage as Pretzels. They were marginal players who will remain bright spots in the annals of baseball history because they weren’t called Jeff Michaels.

There is one player who for a fleeting moment caught lightning in a bottle and turned an unequivocal superstar name into superstar play on the field. That guy is none other than Snuffy Stirnweiss. In the early 40s, Snuffy was not only a name to admire but he also was arguably the best position player in the game. He played for the New York Yankees, won three championships and avoided going to war. Everything went right for Snuffy, until it didn’t. Until everything went so wrong you wonder if he sold his soul to Robert Johnson.

Stirnweiss started his career trapped in the minors because Yankees incumbent second baseman Joe Gordon was one of the best in the game. With Gordon winning the MVP in 1942, it seemed Stirnweiss was destined to be traded. That is, until Gordon decided to join the WWII efforts that offseason, opening up a spot for Stirnweiss at second. In his rookie season, Stirnweiss logged a pedestrian .219 average, just one home run and 25 RBIs over 83 games in 325 plate appearances. He played mostly at shortstop and second base. Stirnweiss would be part of his first World Series winning team.

It wouldn’t take long for Snuffy to blossom as a player. The following year, now firmly entrenched as the Yankees starter, Stirnweiss exploded, batting .319, leading the league in hits (205), runs (125), triple (16) and stolen bases (55). He also lead all of baseball with a .981 TBv and finished second to Stan Musial with an 8.5 WAR. Of course, most of the league’s talent (Ted Williams, Bob Feller and Joe DiMaggio to name some scrubs who weren’t playing at the time) was compromised by WWII, leaving fans and history to forgot Stirnweiss’ remarkable season.

In 1945, Snuffy followed with perhaps an even greater year. He would lead the league once again in runs, stolen bases, triples and hits. This time he would also lead in batting average, slugging percentage, OPS and OPS+. He was, without question, one of the two or three best players in the game.

In 1946, Snuffy made his first and only All Star team, but with players returning from war, by and large everything went abruptly south. He hit just .251/.340/.318 over 129 games and 560 plate appearances. The year after that he didn’t fair much better, hitting just .256 over 148 games. While he did still score 102 runs, he managed to swipe just 5 bases, a steep decline from the 55 he grabbed three years prior. In 1948, Snuffy’s last as a regular, he mirrored his 1947 line almost to the tee, batting .252 and stealing 5 bases. In 1949, Snuffy won his last World Series while getting into just 70 games. He managed 41 hits to the tune of a .261 average. The following year he would be traded to the St. Louis Browns and the year after that to Cleveland. His career was essentially over before he left for the Browns and then his career was really over in 1952.

From 1943 – 1947, Snuffy Stirnweiss had the third best WAR with 21.2, behind only Musial and Lou Boudreau, ahead of greats like Charlie Keller, Luke Appling and Phil Cavarretta. He stole the second most bases with 117, behind speedster George Case. He also managed to finish in the top 15 in triples, hits and runs. His spectacular 1944 campaign put up a WAR better than Hall of Famers Bobby Doerr, Boudreau and Mel Ott. In 1945, with even Musial now overseas, Stirnweiss had the highest WAR by almost a full win, 2.7 wins ahead of Eddie Lake, who finished in third.

Perhaps a dubious distinction, but you would be hard pressed to find a better baseball player during the war years.

Snuffy bounced around as a minor league manager in the early 50s but decided to hang ’em up for good after the 1955 season. After Snuffy left the game, his real struggles started. He briefly went into banking to support his six children, but he fell ill and in 1957, at just 38 years old, he suffered a heart attack. Things didn’t get better, in fact, they took a bizarre tragic turn. On September 15th, 1958, Snuffy boarded a train into Manhattan. For inexplicable reasons, the train veered into a restricted area and plunged off the Newark bridge lift into the bay. Stirnweiss was killed at 39.

For all the famous Yankees with some excellent nicknames, Stirnweiss, even to the most ardent fans, remains forgotten. His candle burned bright but only for a very short, compromised time. His name and his skill were the kind of combination we should remember forever. It’s the stuff that makes baseball a silly, irresistible game.