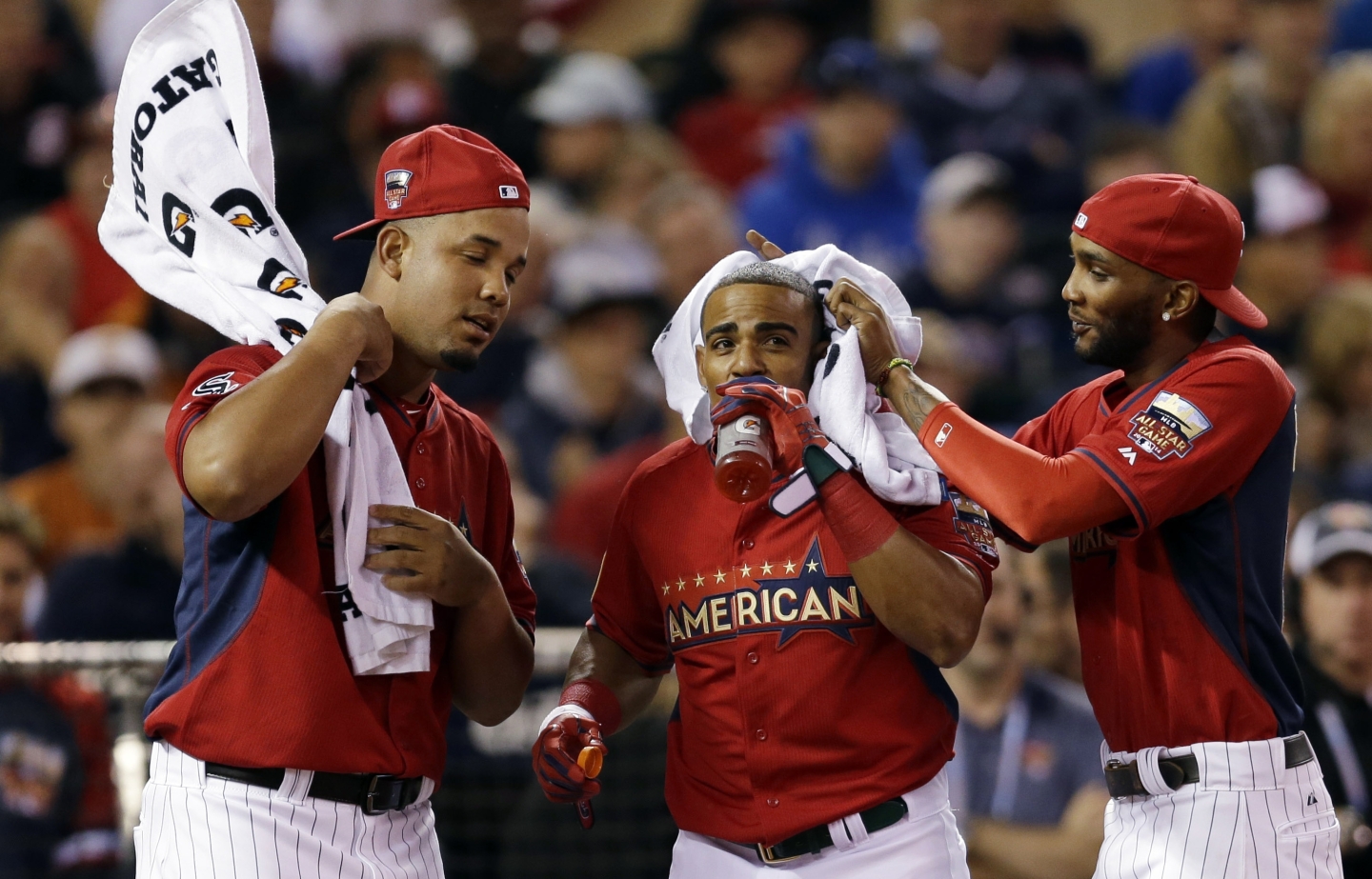 So far this offseason, the Chicago Cubs have made a lot of noise.  They not only signed pitcher John Lackey and super utilityman Ben Zobrist, but also outfielder and sabermetrics darling Jason Heyward.  Seeing as the Cubs have not won a World Series since 1908 and came pretty close last year with a young and relatively inexpensive team under the leadership of new skipper Joe Maddon, it makes sense that the team pulled out the checkbook.  Interestingly, the only team in Chicago to win a World Series since 1908 has been the White Sox, and they actually did it twice: way back in 1917 and more recently in 2005.  Yet the Windy City is a Cubs town and Chicagoans are gearing up for a North Side-style parade next October.  As the Cubs have added quite a lot to go with last year’s 97-win team, many already see them as World Series contenders and breaking their long drought.  However, by the time the Hot Stove season is over, White Sox General Manager Rick Hahn and his team could end up stealing the Cubs thunder and reminding the City of Chicago that they’re not just significant on the South Side.

Last week in a three-team deal, the Sox acquired third baseman Todd Frazier from the Cincinnati Reds.  The move garnered praise throughout the baseball world, especially as the Sox have not had a regular at the hot corner since Joe Crede in 2008.  The trade for Frazier came at the heels of the Winter Meetings, in which Hahn had previously picked up infielder Brett Lawrie from the Oakland Athletics, now destined to play second base.  After revamping the catcher situation by signing Dioner Navarro and Alex Avila, the Sox have overhauled their infield to the tune of 8 wins according to FanGraphs.  With all this accomplished, many teams might sit pat and go into next season delighted, however Hahn has stated that the he and the White Sox “are not satisfied at this point” and are “still looking for upgrades.”

White Sox owner Jerry Reinsdorf, turning 80 this season, wants to win.  After the late 1990s debacle of Jaime Navarro, Reinsdorf has shied away from handing out free agent contracts to pitchers.  However, Reinsdorf has consistently showed a willingness to sign a power hitting position player to a long term deal (e.g. Albert Belle, Adam Dunn and Jose Abreu) and if an upgrade were needed, it would be another power hitter to go along with Abreu and Frazier.  After trading away Trayce Thompson in the Frazier deal, the Sox have a glaring hole in the outfield that could be potentially filled by a power hitting free agent.

Grant Brisbee at McCovey Chronicles explains that it may be a buyer’s market for top-tier outfielders, naming the White Sox as one of the potential destinations of either Yoenis Cespedes, Justin Upton, or Alex Gordon.  Of those three, the least appealing for the Sox would be Gordon as he lacks the power of both Cespedes and Upton and is the oldest at 32.  Given a choice between the remaining two, the Sox may be more inclined to go with Cespedes for two reasons.  First, the Sox would not have to forfeit a draft pick to sign the 30-year-old.  Although the White Sox have a protected first round pick, they have two others that are potentially within the first forty-five that are not protected.  With the 2016 draft class reportedly very strong, the Sox may not wish to forfeit one of those remaining two to sign Upton.  Second, the White Sox are home to Cuban and Cespedes friend Jose Abreu, and have a long history with Cuban players, starting with Minnie Minoso back in the 1950s.  Even during this winter’s MLB Cuban tour, shortstop and Cuban Alexei Ramirez, who did not have his contract picked up by the Sox at the end of the season, proudly wore his White Sox uniform.  This loyal Cuban relationship is a connection between the team and Cespedes that potentially can be as important as the final contract amount, especially if it’s a competitive offer.  As Brisbee reveals, the market may make any Sox offer quite competitive.

Comments by Hahn reveal that the Sox, with limited financial flexibility even in a big market city, need to get “financially creative” to add to the payroll, currently estimated around $115 million.  A creative offer like those we’ve seen of late (deferred money, player opt-outs, back-loaded annual average value, etc.) would allow for a free agent signing such as Cespedes.  Further comments by Hahn, however, reveal that a free agent signing may not be the only move on the table: “We’re going to continue to be aggressive on numerous fronts and certainly continue to talk to various free agents as well as other clubs about trades.”  A trade would not only bring back a potential upgrade, especially in the outfield, but it could also be a part of the financial creativity that Hahn might be looking for.

Known trade chips for the Sox include right fielder Avisail Garcia and first baseman Adam LaRoche.  Garcia, set to make about $3 million in arbitration, is under team control through 2019.  Known as a “mini” Miguel Cabrera, he has yet to live up to his potential, however the talent is there.  LaRoche, owed $13 million in the last year of a two year deal, is a potential bounce-back candidate after an abysmal 2015.  With Gold-Glove caliber defense and 10 years of 20 or more home runs, LaRoche may still have some value left.  That being said, a straight up trade of LaRoche to a team is highly unlikely (the Pittsburgh Pirates turned down such a deal, even after the Sox reportedly offered to eat $8 million).

If we are to gather that Hahn and the White Sox are exploring potential trades to upgrade their outfield, a potential trade target could be right fielder Carlos Gonzalez, one of the three outfielders the Colorado Rockies have made available.  Owing the outfielder $37 million over the next two years, the Rockies would love to move CarGo off their payroll, with rumors swirling the team may have to eat up to $12 million to find a trade partner.  A team like the Sox, whose front office believes in a left-handed power bat (previously Jim Thome and Adam Dunn) could make a play, offering a package of Garcia, LaRoche and one or two prospects, including a top minor league pitcher in the Sox system like Spencer Adams.  With the Sox set to spend roughly $16 million on both Garcia and LaRoche, the dollars would practically be a wash for this year.  To get the deal done, the Sox could also offer to eat up to $8 million of LaRoche’s contract as they offered to do with the Pirates.  With the Rockies sending pitcher Tommy Kahnle to Chicago for a minor league pitcher earlier in the offseason, the Rockies have revealed a familiarity with the Sox farm system as well as an established working relationship, one in which a potential CarGo proposal has already been discussed.

Why would the Rockies take such a deal?  First, they have a history of swapping players from the same position to avoid creating a new positional need (e.g. last season’s deadline deal of shortstop Troy Tulowitzki for shortstop Jose Reyes).  In Garcia, they would have a 25-year-old right fielder under team control through 2019 who could step into the vacant spot left by CarGo.  Second, the Rockies are in need of a short term veteran presence for its youthful team, especially after Reyes’ domestic issues.  In LaRoche, they would have a 36-year-old, left-handed Gold Glove first baseman who could have a very good bounce-back year after returning to the National League.  With this season being the last year of his two year deal, there would be no payroll obligation beyond 2016.  Third, the Rockies are always in need of pitching and have been reported as asking for such.  A top pitching prospect like Adams, who was considered a steal from the second round two years ago, could fill that need.  Fourth, by eating some of the money owed to LaRoche, the White Sox would save the Rockies from CarGo’s contract entirely.

If a deal like this went through, the White Sox would certainly have made some financial adjustments, keeping their payroll to roughly $123 million.  Signing a player like Cespedes to a long term contract could still work, seeing as starting pitcher John Danks and his $15 million would be coming off the books next year.  A back-loaded deal with an increasing average annual value over the length of the contract (plus the popular opt-out clause) could be enough to sign the Cuban, keep payroll just shy of $140 million, and potentially leave enough financial flexibility in the future.  Although $140 million might be a stretch for the small market White Sox, a potential lineup that could include Abreu and Frazier along with Gonzalez and Cespedes may very well have Reinsdorf giving the go ahead.

Last year, the Sox hit the fewest home runs in the American League and had one of the worst, if not the worst, defense in all of baseball.  With this new look, balanced R-L Sox lineup, there is not only the potential for more than 200 home runs, but there is also potential for the defense to be drastically improved.  The one glaring offensive hole, shortstop Tyler Saladino, makes up for his lack of hitting by playing exceptional defense up the middle.  Couple this lineup with a rotation headed by Chris Sale and Jose Quintana and a bullpen led by closer David Robertson, and the White Sox could potentially be quite the formidable team, not only ruling the city of Chicago but all of baseball, stealing the Cubs thunder.

At the very least, there would be four interleague games worth watching this summer in the Windy City.