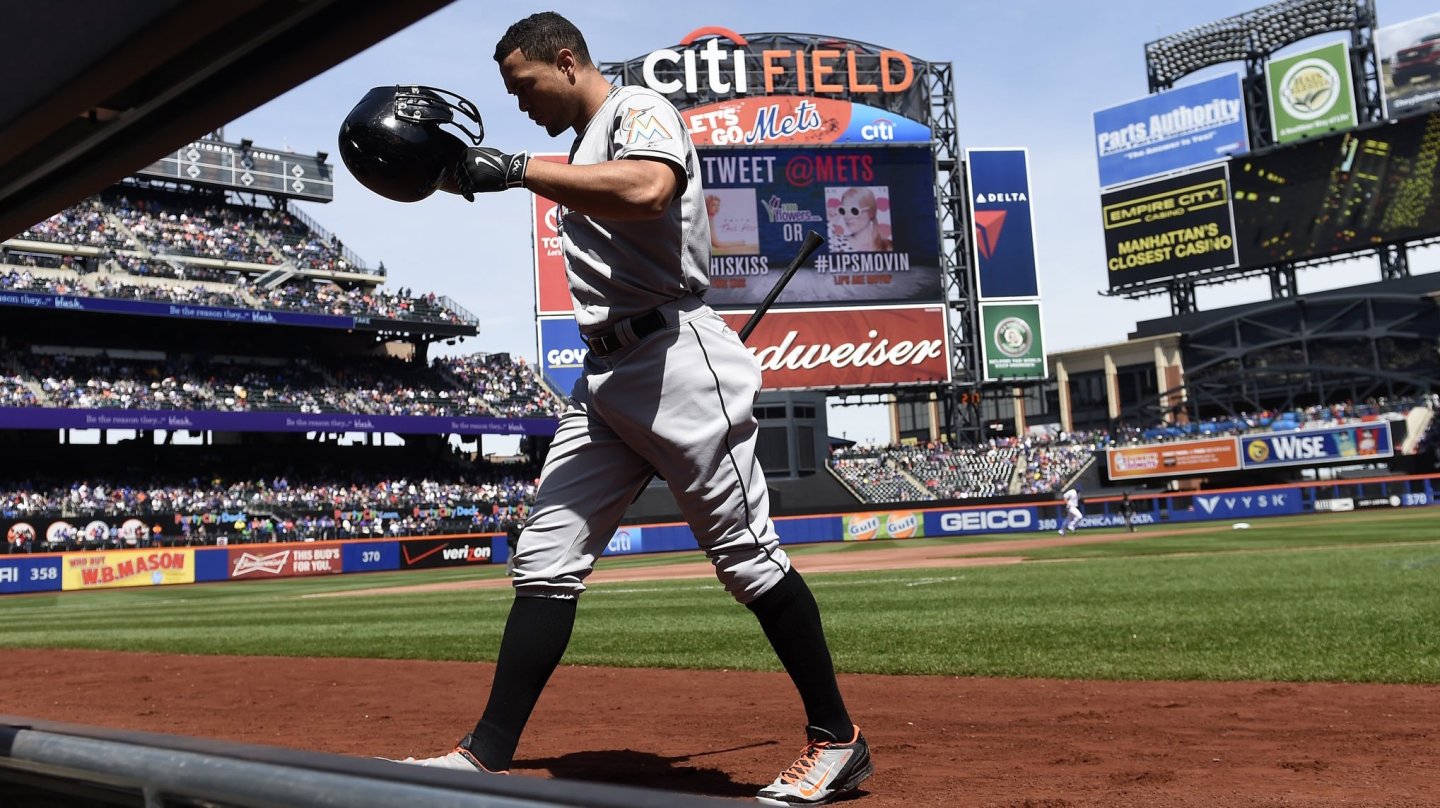 Heading into this season, perhaps no two teams looked more similar than the Miami Marlins and the New York Mets. Both are young rosters with superstars and veterans in place, along with organizational and fan base expectations moving from winning soon to win now. They also both happen to play in the National League East where the powerhouse Washington Nationals were supposed to block them from doing anything but make runs at the wild card slots. However, two weeks into the season the Mets and Marlins are a study in polar opposites. In fact, they sport exactly inverse records with the Mets sitting at 10 – 3 and the Marlins sitting at 3 – 10 putting the Mets in first place and the Marlins in dead last. This is due in large part to the Mets’ sweep of the Miami ballclub over the past four games. The games weren’t all that close even if the final scores aren’t that lopsided, as the Mets used dominant starting pitching and consistently timely hitting to leap ahead and stay in control.

While the trajectories were similar, it was the Marlins and not the Mets who possessed the least question marks. There were lingering questions about a seemingly bad offseason signing of Michael Cuddyer and whether veterans like Curits Granderson could still be productive. Additionally, their ace is still recovering from Tommy John surgery so there was no telling how that might send ripple effects through his performance. On the other hand, the Marlins have an outfield core who were all trending upwards, including one of the game’s most recognizable superstars and highest-paid players in Giancarlo Stanton. Pitching was always going to be a worry but there was hope that veteran acquisitions Mat Latos and Dan Haren would balance an otherwise young staff before all-world righty José Fernandez returned in the summer. We aren’t even out of April yet so no amount of failure is insurmountable, but having attended this weekend’s Marlins/Mets series, there are some obvious takeaways that don’t look to be changing any time soon.

The Mets really can pitch.

For some teams, just their very being is enough to keep fans skeptical. In some ways, I think the Mets are their own worst enemy and for that reason no amount of hype can usurp how often they let us down. Well, the pitching should’ve been hyped more because after the first two weeks it looks that good. Matt Harvey hasn’t been without his rough patches, but so far his return from surgery has been a success. He has shown commend and moxy, two traits that have made him a fan favorite. As his stuff gets back into place, he should settle into being one of the best in the game soon enough. Many of the questions regarding the pitching started with Bartolo Colón and Jacob deGrom. One, an aging veteran who has to break at some point, and the other a sophomore who may have played above his head a year ago. At this point, both look as sharp as any one two punch in baseball. Consider then that Dillon Gee and Jon Niese round out the rotation and things get scary. Also, going into Saturday, the bullpen had gone 22 innings without giving up an earned run. Things got a little shaky over the weekend, though we may have to chalk that up to some wear and tear on guys like Carlos Torres.

Don’t sell on Granderson and Cuddyer just yet.

Just as we are skeptical of the Mets because they are the Mets, we will forever be skeptical of Rockies hitters who leave Coors Field. It makes sense. Yet, Michael Cuddyer has spent the early part of this season silencing critics. Two years removed from a batting title, Cuddyer’s signing might have signaled the most pessimism towards the team this past offseason. Partially because of the expected regression, injury possibility, and poor defense Cuddyer offers, and also because as the only major signing it left the team virtually unchanged from last season. Early on, Cuddyer has been a potent middle of the lineup threat. While his strike out rate is up, so is his isolated power. As he has throughout his career, Cuddyer is using his contact skills to get on base and keep an elevated batting average. We can assume the strike outs and power will level off, but as long as he stays healthy, he will remain a difficult out. On the other hand, Curtis Granderson has transformed from his strange stature as a power-hitting leadoff guy into a more prototypical patient top of the lineup bat. In his first 53 PAs, Granderson flaunts a 22.6 BB% against a 15.1 K%. He hasn’t tried for the kind of power he’s shown in past seasons and that might be what makes him precisely the table-setter the Mets need going forward.

Travis d’Arnaud is the x-factor.

This actually acts as bad news considering that d’Arnaud was hit in the hand on Sunday and looks to be out for a substantial amount of time. The injury came at the worst possible time, as d’Arnaud is finally looking like the franchise catcher that Mets fans have been waiting for for a long time. The 26-year-old left Sunday hitting .317/.356/.537, good for a 1.3 WAR. Early on he’s looked like the best two way catcher in baseball, calling commanding games and hitting for both contact and power. On Saturday, he blasted a no-doubter early in the game, that gave deGrom the entire cushion he needed to coast into the 7th. In the mid-2000s, Paul LoDuca was an anchor for a similarly-built Mets squad that should have competed further into the playoffs had they not been the Mets. It doesn’t take much to see that with d’Arnaud go the Mets this season. d’Arnaud’s fractured hand will keep him out close to eight weeks, but the saving grace is top prospect Kevin Plawecki now gets the call. If he’s as good as advertised then the Mets will have the chance to carry two strong multi-dimensional backstops, something that could prove helpful as the team slogs through the summer. Last year, Salvador Perez’s bat went radio silent for the Royals as he logged more innings behind the plate than any other catcher in the game. Considering how many dividends d’Arnaud’s offense has already played, a little bit of rest could go a long way.

Dee Gordon may actually be good.

Gordon can make a lot of contact. When he learns to embrace that putting the ball in play is his best chance to get on base, he’s as good as any leadoff man in the game. Patience isn’t his bag, so why force it? On Saturday, Gordon went 5 for 5 in precisely the way that Gordon should go 5 for 5. Early on he legged out two infield hits on close plays, allowing himself to get on base and set the table for the hitters behind him. Late in the game, when the pressure was on, pitchers gave him better looks and he drove three balls hard. The BABIP numbers can say all they want but Gordon wasn’t cheating the system on any one of his hits. As we know, after Gordon gets on he’s dangerous. In the top of the 9th with a 5 – 4 lead, Gordon was on first base. This was, by any estimation, a risky time to try a steal. Yet, Mets southpaw Alex Torres threw over time and again, even as he was beating the pants off Marlins lost second-hitter Christian Yelich. Torres struck out Yelich on three pitches to end the game. He threw as many balls to first base to keep Gordon close. That’s what you call havoc. Now, the issue may not be that pitchers started to figure Gordon out late last season, but that the Dodgers hitting behind him became more predictable, allowing pitchers to keep the ball away from Dee. As Marlins bats continue to look out of sync, there’s risk of the same thing happening here, however, there’s only so much Dee can do. In the right lineup, he’s a force to be reckoned with.

Giancarlo Stanton may not actually be that good.

Maybe I’m the only one who thinks Stanton’s 17 Ks over his first 46 ABs are concerning, but after watching him swing and miss on final strikes three times on Saturday, it’s safe for me to have pause. The problem does seem psychological, but by the looks of it that has nothing to do with his face injury. Instead, I get the impression that Stanton might be buying into the hype that a 13-year, $310m contract can provide. He hasn’t shown a lot of patience in an effort to bounce the ball off the moon during every big swing. Stanton is a guy who’s hitting profile looks prone for major slumps as his long arms can’t get through the zone quick enough to make consistent contact. The tradeoff is power and a piece of lumber in the middle of the lineup that strikes fear in pitchers and allows other hitters to take advantage. However, the separation between a superstar like Dave Winfield and a clog like Adam Dunn is very thin. Stanton stands the chance of being a monumental bust if he doesn’t adapt to a hitting zone ripe for exploitation. He was always going to strike out, but if he doesn’t do much else, then even the occasional power burst will make him a disappointment. I may be dead wrong, but I have a striking suspicion that Giancarlo may not be that good.

The Marlins have a pitching problem. For real.

Mat Latos was supposed to be a new pitcher this year, with slightly increased velocity and more command of his breaking pitches. He is a new pitcher, it seems, only he’s a bad one. After getting lit up and not making it out of the first in his opening outing, he’s improved a tiny bit, though not enough to diminish all fear. Against the Mets, Latos scattered 6 hits and 2 earned runs over 5 frames, while striking out 5. He never looked awfully in control, which led to a fast 75-pitch hook by manager Mike Redmond. An injury to reliable starter Henderson Alavrez adds to the concern, as does malcontent starter Dan Haren’s early woes. The bullpen has been equally bad, averaging 4.91 earned runs over 47.2 innings in the young season. The Marlins’ staff needed to hold the fort down until their ace came back. At the moment, it looks like the wheels might fall off long before Fernandez can do anything to save them.

Right now, Pecota has the Mets with exactly a 50/50 chance of making the playoffs, projecting just shy of 85 wins. I’d caution that these are still the Mets and if any team should be given exactly zero margin for error it’s these guys. However, the stadium was rocking on Saturday night, a welcome sight for a franchise that knows too well how to keep their heads down and try to look invisible. Both New York teams swept the weekend, which reminds us that when these teams are winning there may be no more electric baseball city in the league. It’s an especially exciting change given how both the Mets and the Yankees have been the butt of far too many jokes over the past few years. It’s too early to say 2015 could turn it around, but so far so good.