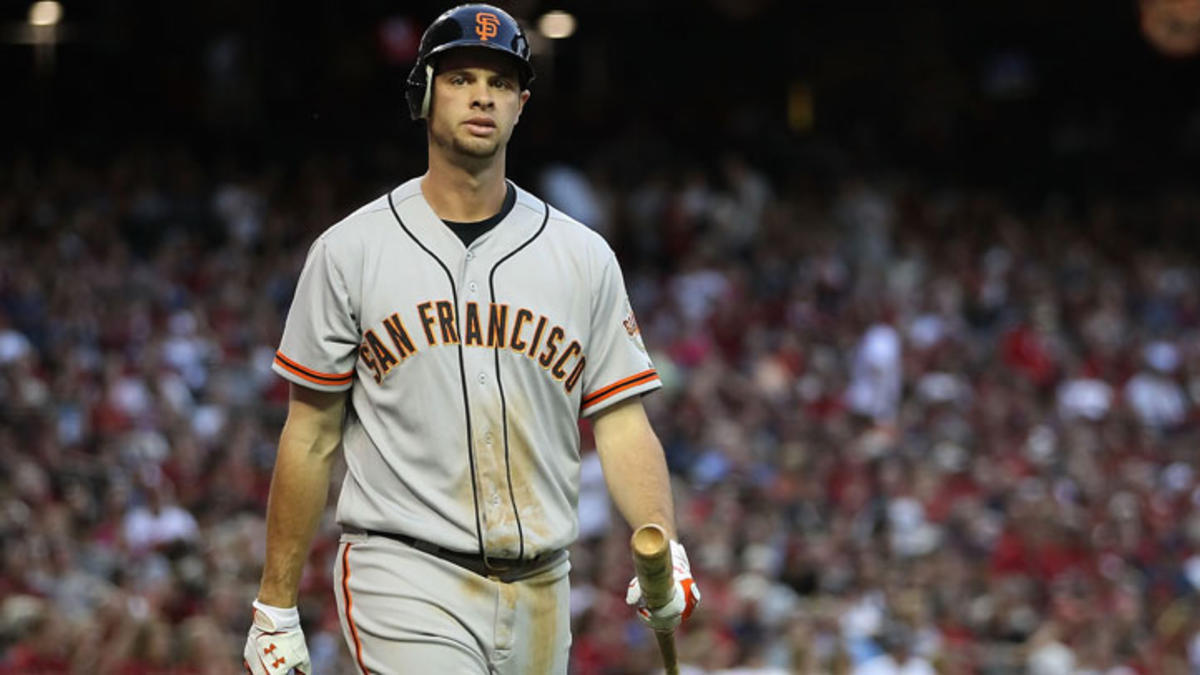 I hate Brandon Belt. Not as a person obviously, I don’t know the guy, that would be insane. Not even as a ballplayer – he’s a fine-looking drink of water who fills out a modern baseball uniform well enough. And not even entirely because of production. He hasn’t been great, but he’s not the worst sixth hitter to plug into a lineup built for the sort of hitter just like him. I hate him the way Chuck Klosterman explains in his write up about how fantasy sports have unnecessarily caused us to raise our expectations of athletes and hate these perfectly decent sporting men to the point of bringing our blood to a boil.

I will be drafting a fantasy team in a few days and Brandon Belt will most likely be staring me in the face in the middle rounds and I will hate him all over again. The way I hated Pat Burrell, JD Drew, JT Snow, Austin Kearns, off-year Aramis Ramirez and pre-“holy shit he’s a Hall of Famer” Adrian Beltre. These are all reasonably productive corner infielder/outfielders who would almost definitely be terrible until the point where I plant them on my bench only to watch them hit two home runs in one game before another 0 for 12 slump back in a starting spot. I hate them like a dieting fat person hates the ice cream dispenser at a buffet. There’s no logical reason to even bother with these guys yet they taste so good in the moment. I hate Brandon Belt and I will almost assuredly have him on my roster come next week.

Now, this piece is about Brandon Belt, but really depending on the taste of poison you prefer, you might relate more to the Carlos Beltran types or the Kyle Lohse types, or maybe you hate Baseball and can see this slot as the Jamaal Charles, Vernon Davis slot. It’s you’re world, Brandon Belt just lives in it, screwing shit up.

In the minors, Belt was a stud. Not necessarily Kris Bryant-like, but pretty darn close (seriously, check out both of their age-22 seasons). In a little more than a full Major League season’s worth of ABs, Belt batted .350 with 34 HRs and 154 RBIs. He also produced an “oh by the way” .461 OBP and .610 SLG in that time, good for a nonsensical 1.071 OPS. All told he went for 11.2 WAR over three seasons according to Carson Cistulli’s MiLB WAR chart. He was the kind of prospect you could safely take in the 13th round and feel OK sight unseen in the majors. So how has he translated in the pros? Well, frustrating. In part because he hasn’t been all that good, but also because he hasn’t been all that bad either. That’s what makes the Burrell/Snow/Drew’s among us so frustrating. The promise is too high but output too low, yet the output’s too high to sink the ship altogether. Since breaking into the league full time in 2011, Belt has logged more than 500 PAs just once. It was 2013 when he hit to the tune of a 139 OPS+, a .360 OBP and .481, adding up to a strong 3.9 WAR. Pretty darn solid numbers for a young sixth hitter, right? Now let me rewind and re-frame that. In 2013, Brandon Belt had his best season. In that season he played first base and finished with 17 HRs with 67 RBIs, 5SBs, 76 Rs and a .289 in 150 games. Suddenly, that great line looks rather pedestrian. In fact, he finished 17th amongst starting first basemen in home runs, barely in front of James Loney. That was out of 18 first basemen total. He also finished 14th in RBIs, eight behind James Frickin’ Loney.

Last season, The Baby Giraffe (Belt’s ridiculous nickname) looked like he might finally become the above average fantasy 1B that his size and skillset projects. In the first half, in 165 PAs he smacked 10 HRs for 22 RBIs. His .245 was already low and he didn’t contribute all that much in the way of getting on base. But alas, he was hitting for power and that’s what we want out of a Brandon Belt, right? That is until the second part of the frustration with the Brandon Belt types came up and bit him. He got hurt. In his 60 second half PAs, he was good for 2 HRs and 5 RBIs. He was back and he wasn’t hitting… at least until the 18th inning of the Division Series. In his 235 total PAs he hit 12 HRs and tallied 27 RBIs. The low differential between HRs and RBIs is one problematic aspect of Belt that jumps out. He’s not unproductive, as 25% of his homers have come with RISP, yet he feels middling. The question that will be posed over the next few years is whether Belt can be a frontline first baseman or a constant question mark. As far as the Giants are concerned, they have a strong contributor when he’s on the field. However, his fantasy value will always be suspect. In the case of Adrian Beltre, value can be gained as great hitters continue being who they are even as the game around them transforms. Considering the position Belt plays and the type of player he project to be, it’s a long shot to assume he will ever have that kind of ascension.

For those paying attention, Belt is batting .355 this spring with 3 HRs, 6 RBIs, an .806 SLG and 1.266 OPS. An alternative piece could be about how Belt will be the breakout player of next season. But, you know, Brandon Belt probably won’t have a breakout year. In fact, he may never have a real breakout year. But certainly this coming year is far from an all or nothing campaign. Next year won’t be all or nothing either. Either will the next. And he’s not the kind of guy who will lose value since he will keep plugging away with those sorta kinda good numbers. And he’s a lefty bat in a position that ages fairly easily due to the limited need for mobility. Which basically means we have a lot more years of Brandon Belt on MLB rosters and at least a good amount more of staring at Brandon Belt, the guy that could be, in our fantasy draft room.

Yet, after all this rambling, I bet you dollars to donuts I will wind up with Belt on my team this coming season. And so will you. You know who you are. And we’ll pray we can together eat all this unfair, unsubstantiated skepticism. But we won’t. He’ll go on being quite good at a really, really difficult sport and I’ll go on hating him and drafting him, hating him and drafting him.